Princess cut stones are popular because they blend the greatest features of numerous different cuts into a single design. The square diamond is a wonderful alternative to a round brilliant diamond since it is contemporary and stylish. Because the form of the diamond is already identical to the shape of the raw diamond it is cut from, princess cut diamonds are a cost-effective alternative for engagement rings. As a result, gem cutters squander less diamond. 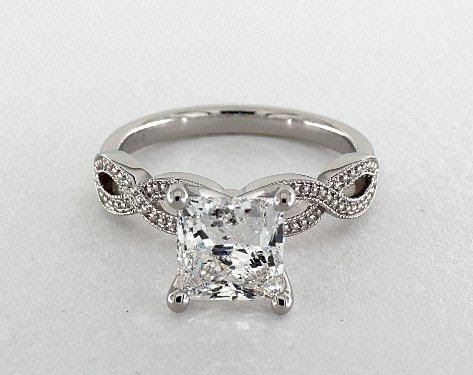 The design on the crown as well as the amount of cuts on the pavilion can differentiate princess cuts. While neither affects the value or quality of the product, you will favor one over the other. French or bezel corners can be seen on the crown of a princess diamond, which is the part of the diamond that faces up when you gaze at it. (Diamond-shaped facets extend from the table corners to the stone corners in princess cuts with bezel corners; star facets point to the stone corners in princess cuts with French corners.) Unless you have a strong affinity for French corners, stick to bezel corners since they are more robust. Chevron shapes on the pavilion or bottom of a princess cut generate the diamond's brilliance. Two, three, or four chevrons can be seen on princess cuts. Two chevrons generate bigger, bolder flashes of light and color, whereas four chevrons produce more scintillation but smaller facets. Those with three chevrons represent a happy medium. 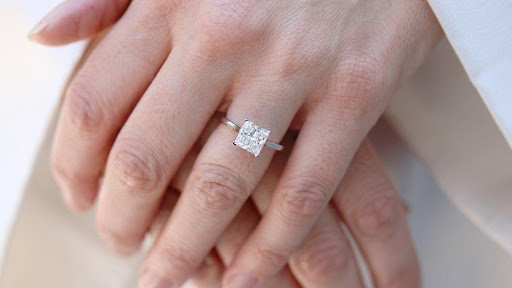 They use a significant percentage of the raw diamond (about 60%-70%), which means that very little of the valuable rough material is wasted. Because there is less waste, a princess cut diamond will cost less than a round brilliant of the same carat weight. Keep in mind, though, that this is a highly popular cut. As a result, princess diamonds will command a greater price than other fancy shaped diamonds, such as the radiant cut or pear shaped diamond. Princess cuts are frequently less expensive per carat than other brilliant cuts. Because to the design, more of the rough stone is saved during the cutting process. Because they're so faceted and deep, they also do a great job of hiding inclusions or inherent flaws. However, like with other diamonds, the price of your princess will be determined by how it is assessed using the 4 Cs of diamonds. The cut of your stone is very significant because it affects its brightness, or shine. A diamond with a poor cut will seem dull, but a diamond with a good cut will keep its sparkling brilliance. As a result, you should search for a stone that is well-cut, polished, and symmetrical.

When princess cut diamonds are placed in engagement rings, they have a very royal appearance. Not to mention that they look fantastic in earring, pendant, and bracelet settings. Consider the princess cut diamond as a good competitor whether choosing a stone for an engagement ring, an extra stone for an existing ring, or a stone to build an altogether new piece. It has a lot to offer and very few drawbacks.