Rare Chameleon Fancy Diamonds: Everything You Need to Know

“Diamonds are a girl’s best friend!” the famous Marilyn Monroe quote says. Many women dreamed of becoming friends with diamonds as well, begging their boyfriends and husbands-to-be to buy diamond engagement rings and other diamond jewelry. Nowadays, there are many options on the market for this demand.

Have you ever heard about a chameleon diamond? This is one of the most unexplained color-changing gemstone capable of ruining the very basics of a GIA 4C rule. Chameleon diamonds can have a different hue. There have been some theories recorded, but none had enough scientific evidence to prove the existence of this fact.

What is a chameleon diamond?

A chameleon diamond is one of the most mysterious diamonds in the world. It can change its color from olive to a deep yellow hue. This situation occurs when you keep the diamond in the dark for 24 hours or heat it to 200-300 Celsius. Can you believe that? If you put a chameleon diamond back to the sunshine or remove it from the heat source, it will get a light olive hue again. Some diamonds change their tone from stable yellow to green when they are heated. Because of that, such stones are called “reverse” chameleon diamonds. 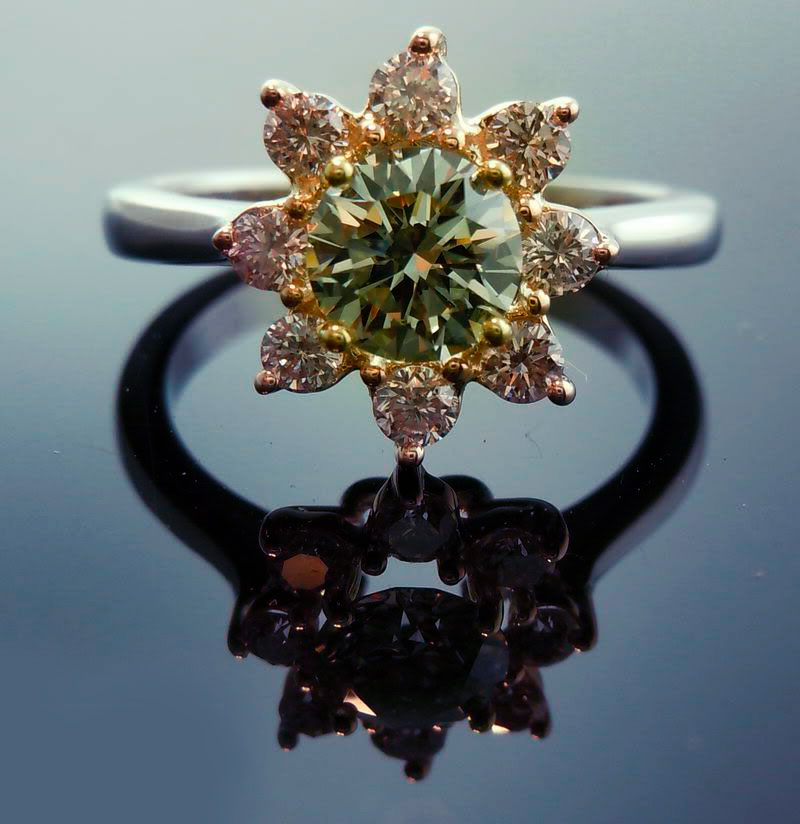 There are two types of chameleon diamonds known to the world:

A “classic” chameleon diamond has two different natural abilities. On the one hand, you can change its color from light olive to dark yellow by heating it or removing it from the light. However, overheating the jewel causes dramatic changes in its structure. When the diamond is put down to cold, the color becomes original again. On the other hand, when a diamond remains in a dark place for a long time, it gets darker by itself. When it hits the sun again, it comes back to a brighter tone. These are the basic principles of its photochromic behavior.

A “reverse” chameleon diamond, as its name implies, has a more vibrant yellow color. This jewel turns to a light olive color when you put it in the dark for much longer than a “classic” colored chameleon diamond. When you bring it back to the light, it changes to its original yellow hue once again. There is one interesting fact behind that: “reserve” diamonds do not react to the temperature rise. So, don’t be surprised if you are heating this stone to 200 degrees – it will hold the same color.

How rare are chameleon diamonds?

Certainly, chameleon diamonds are extremely rare. Their history started in the middle of the 20th century. Before that, most jewelers and merchants believed these stones were pure green diamonds. The first case of their studying happened in GIA (Gemological Institute of America) in 1943. After that, GIA specialists took 29 examples of this type of diamonds in terms of finding out the differences between chameleon diamonds and green diamonds.

Katerina Perez, one of the experts involved, said that an average green diamond being exposed to high temperatures would change its color forever. But the real chameleon diamond can easily switch the color and come back to its original hue. If we talk about the origin of this beauty, the scientists at the GIA indicate different sources. Specifically, around 30 percent of chameleons were bought in Tel Aviv, 30 percent were acquired in Antwerp, and the other 40 percent were bought in India. The exact origin of chameleon diamonds remains a mystery to this day.

The most famous chameleon diamonds in the world

There are three of the most famous color-changing diamonds:

The first one, the real giant, is among the largest brilliants the world has ever discovered. This diamond appeared to be fancy enough for a Swiss watch company to buy it in 2007. Another famous example of a chameleon colored diamond has an elegant grеy-green hue. It has around 8 carats, surrounded by pink diamonds in pave and set in a ring of 18K rose gold. No one expected this ring to be sold for a 2,100,000$ – because of the large size and rarity of this jewelry. The least one among these was purchased for approximately 240,000$ in May 2001 at Christie's Hong Kong auction. The diamond was a faceted triangular stone in a platinum base of 4,41 carats.

Generally, chameleon diamonds are such inexplicable due to the mysterious properties of color-charge. Add more color to your life with Diamond Registry!