Do You Know What Pavé Diamond Settings Are? 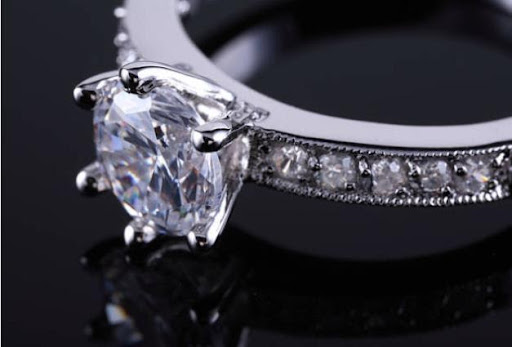 French for 'pavement,' Pavé is a style of setting rather than a specific type of stone. Various settings are included under the pavé style's remit. With the help of metal beads that are barely noticeable, pavé diamonds are held in place. When it comes to pavé diamonds, most are actually melee (pronounced belly), which is a collection of diamonds weighing less than 15 carat, or 0.2ct, in weight.

Pavé Rings, unlike Solitaire Rings, which only feature a center stone and no other diamonds on the band, give any shape or band an extra sparkle. As accent diamonds, pavé diamonds' color and clarity ratings are lower, resulting in lower prices.

Consider a pavé band or halo setting if you'd like to add some sparkle to your ring without increasing the price!

Pavé Settings Come in Many Forms

Different types of pavé settings exist alongside the various types of diamond settings. Micropavé, multi-row pavé, fishtail pavé, and bright-cut pavé are the most popular styles. The key, minute differences between each setting style are what make each one so special and unique.

The shanks of micro-pavé rings are much smaller than those of regular pavé rings, measuring only 2 microns or less. In addition, our 1.5mm wide Super Slim pavé band from Diamond Registry is available for the most delicate of looks. All of the diamonds on our Super Slim bands are full-cut, round brilliants, and each one is individually handcrafted.

Why settle for a single row of pavé when you can have multiple rows of pavé? A diamond encrusted piece of jewelry can be a great way to add some sparkle to any piece of jewelry.

Consider a three-row pave band for your engagement ring if you want your ring to shine from every angle. The 3-Row Eternity Band is an excellent alternative if you don't want to use any of the diamonds from the solitaire ring on your wedding band.

If you'd prefer to have your center stone adorned, but you're on a budget, what are your options? There is no better solution than Halo settings! A halo setting is a row or multiple rows of small, round pavé diamonds that encircle a central stone. A halo setting can enhance a beautiful center stone or make a smaller size stone appear larger.

Fishtail Pavé, also known as French Pavé, is a stunning pavé setting. Diamonds are held in place with V-shaped cuts in metal, rather than tiny beads, which gives the band its fish-tail appearance while also shining more brightly than the metal itself would normally..

Bright Cut Pavé is the most traditional and oldest type of pavé. Diamond melee is held in place against two walls by tiny prongs in this pavé setting style, which is often confused with "channel-set pavé." In contrast, the only thing holding each stone in place in channel set pavé is the two metal walls that act as prongs.

A Comparison Of Pavé Versus Prong

Even the prongs holding the center stone in place on your engagement ring can be pavéd! Pavé prongs are a beautiful and subtle way to enhance the sparkle of your center stone.

Should I Pave or Not Pave?

Before going jewelry shopping, it is always a good idea to have an idea of your budget in mind. Make sure you know how much money you have to spend on engagement rings and wedding bands before you begin shopping. Any ring here at Diamond Registry can be tailored to fit your specific price range.

When it comes to saving money, pavé settings are an excellent option. The GIA cannot grade the clarity and color of pavé stones because they are too small to be used as accent diamonds, but we typically use high-quality diamonds in the colorless and VS clarity range for our engagement ring designs. Because of this, pavé diamonds can enhance your ring without significantly increasing the price. Pavé settings are the best way to add a little sparkle to your engagement ring, from the prongs to the band to the center stone.

Trying to decide if a pavé setting is right for you? Contact us at info@diamondregistry.com to find your perfect ring.

You're all set to begin the design process, aren't you? Make an appointment with a member of our design team to discuss your vision for the ideal ring.