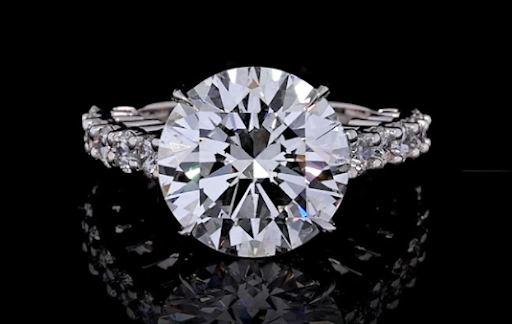 The shape of the centre stone is an excellent place to start when looking for the perfect engagement ring. The centre stone is of course the most important part of the ring, and you'll want to take it into consideration when choosing an engagement ring setting or a wedding band. While each stone shape has its own unique beauty and allure, you should be aware of its pros and cons before deciding which one to buy. The relative cost of each design, the level of brilliance, the size and shape of your hand, and your personal style are all important considerations.

When it comes to wedding hairstyles, the round cut has been the most popular for over a century. Brides who value tradition and deep symbolism favour round cuts. In order to maximise the amount of light that bounces back through the top of the diamond, a round brilliant diamond has exactly 58 facets with precisely calculated proportions. There is more fire and brilliance in round cut diamonds than any other shape! In this case, the trade-off is cost. The price of a round-cut diamond is higher than that of any other shape in the same carat weight. For this reason, more of the rough stone is discarded when it is cut into a round brilliant shape with ideal proportions. Round diamonds are universally flattering to all hand shapes, from the narrow digits of a thumb to the wide fingers of an index finger.

When it was first introduced in the twentieth century, the princess cut diamond was a relatively new and modern shape, but it quickly became the most popular fancy diamond shape. They also have a brilliance that comes close to matching the round cut's brilliance. Princess stones, which have a square shape, work well with modern ring designs. Princess cuts have the advantage of wasting less material from the rough stone, which results in a lower price per carat than a round cut. Compared to round stones, they appear larger from the top and can be worn by both slim and small hands.

This princess cut engagement ring has a modern geometric appeal thanks to its trapezoid side stones. A curved diamond bridge adds a dash of sparkle to the clean three-stone design.

Over the course of more than three centuries, cushion-cut diamonds have become one of the most popular diamond shapes. It's a square with soft corners that gives it a little more structure than a round diamond, but a softer, more romantic feel than a princess-cut. Cushion cuts can give the illusion of a larger stone because of their long diagonal length, which makes them less expensive than a comparable round stone. They're a good choice for those with long, thin fingers. Their lack of brilliance compared to more contemporary diamond shapes is a drawback. Their warm glow, on the other hand, exudes a charming retro vibe.

Diamonds and other gemstones cut in an oval shape first became popular in the Victorian era. In the mid-20th century, the oval cut we know today, with its impressive fire and brilliance, was developed. While a round-cut diamond of the same weight is more expensive, an oval diamond has a larger surface area and can be purchased at a lower price. Additionally, their elongated shape aids in elongating and slimming wide fingers. An east-west set oval, on the other hand, can give the impression of greater width.

Because of its distinctive rectangular shape, the elegant rectangular emerald cut diamond centre stone was originally developed for its namesake gemstone. Emeralds, unlike other gemstones, are step-cut, creating a hall-of-mirrors effect and a focus on clarity. Despite their rarity, they are a good value when compared toround cuts. When compared to other shapes of the same mass, their proportions make them appear larger than they are. Emerald cuts can also give the appearance of longer, more slender fingers. Emerald cuts can be used to achieve this effect.

This emerald cut engagement ring will make you stand out from the crowd with its elegance and sophistication. The shape of the centre stone is echoed and amplified by a stunning diamond halo.

They are also known as teardrop diamonds because of the shape of the bottom and the narrow, pointed top of the pear-shaped diamonds For those who prefer a marquise shape but want a round-cut sparkle, this cut is for you! Pear cut diamonds, on the other hand, have a larger appearance while costing less than round cut diamonds. The way that pear cuts can lengthen the finger makes them just as popular as oval and emerald cuts when it comes to ring styles. It is customary for the narrow end of the stone to point toward the heart of the bride-to-be.

Marquise cut centre stones are eye-catching because of their oblong shape and pointed ends. Supposedly, the shape was inspired by a woman's lips, according to folklore. Marquise diamonds are a variation of the brilliant cut, and their elongated shape gives the illusion of longer fingers. A round diamond of the same carat weight in a marquise cut is less expensive than a marquise cut of the same size.

Regardless of whether you prefer a more traditional look or a more unique alternative, straight lines or soft curves, maximum brilliance or a larger surface area, ultimately the best centre stone shape is the one that you love the most. " By now, you should be able to make an informed decision about which of the most popular diamond shapes is best for you.