What About Men's Ring? 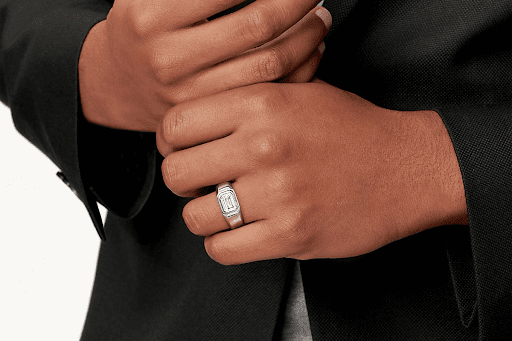 Since the fifteenth century, the practice of presenting your fiancee with an engagement ring has been commonplace.

A diamond ring is traditionally given to a woman by a man who gets down on one knee, sometimes in a romantic setting, and asks her, "will you marry me?"

It is hoped that the partner will concur. Finally, the man slips the ring onto his new fiance's left hand, and the two are now engaged.

Can it, on the other hand, go the other way? Whether or not men wear engagement rings is a matter of debate.

But first, here are a few of our best-selling men's engagement rings to whet your appetite for what's to come. Diamond Registry created and crafted each piece.

How Engagement rings Have Changed Through the Years

It was not until 1477, when Archduke Maximillian of Austria proposed to Mary of Burgundy by giving her an engagement ring, that the first widely documented use of engagement rings was recorded.

However, diamonds were not discovered until around 1850, after which they became recognized as a symbol of affluence and aristocracy. Mounting diamonds on rings was a common fashion choice in the past. Diamond engagement rings became increasingly popular in the Victorian era. However, diamond sales plummeted in the early to mid-20th century due to the Great Depression and World War I.

Diamond prices were low after World War II, so De Beers began their famous "A diamond is forever" marketing campaign. This helped cement the diamond engagement ring as an essential part of the engagement and marriage experience. It's for this reason that the custom of presenting a diamond ring to the intended during the proposal has endured to this day.

Bringing The Twenty-First Century Engagement To The Fore

Since the fifteenth century, humanity has come a long way. There were engagement rings in the past that were seen as a symbol of "ownership" over a woman's body. As a symbol of their commitment to one another, today's engaged couples wear an engagement ring.

The Irish tradition known as Bachelor's Day, which allows a woman to propose to a man on February 29th every Leap Year, has been around for centuries. Incredibly, in England and Scotland, this rule was once enforceable.

Anyone can get down on one knee these days, of course. Many couples, on the other hand, insist on waiting for the man to pop the question.

Is A Man Supposed To Wear An Engagement ring If He's Been Proposed To?

Does it matter if the ring is on a man's finger or not?

Yes, a man can wear an engagement ring as long as he is comfortable with doing so. Some men may be reluctant to do this because of cultural norms, but they have every right to do so and should not be ashamed of showing their devotion to their partners in this way.

Gender stereotypes are being deconstructed as we move forward. Women are increasingly proposing to men, and men in LGBTQ+ relationships are proposing and being proposed to.

As more and more men are being proposed to by their partners, there has been an increase in the number of men's engagement rings.

What Is An Engagement ring For A Man?

A male engagement ring, on the other hand, can be anything. Tradition dictates that the ring will be made of diamonds. As an engagement ring that is meant for a man, a band-style design is more likely than a slimmer design with an individual center diamond.

It's entirely up to the person receiving the ring to decide which style they prefer. A more "masculine" style engagement ring may be preferred, but a more "feminine" style design may also be acceptable. Simply put, there is no right or wrong way to do something.