Vintage Engagement Rings to Love for From Every Decade 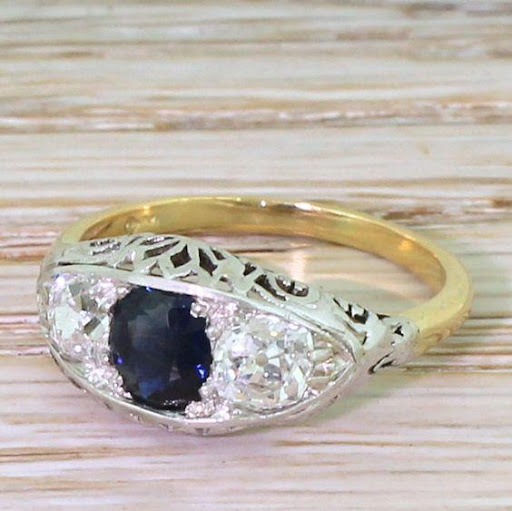 Edwardian engagement rings of the 1910s were commonly embellished with delicate, lace-like filigree in the band and setting, carrying over from Victorian aesthetics. Hearts, hands, and other symbols expressing love and togetherness were commonly used in the delicate patterns. Platinum was only available to jewelry designers around the turn of the 20th century, but as it became common practice, platinum became the metal of choice for diamond rings.

An 18K gold band with a platinum setting is featured on this ring. The bottom of the setting is etched with intricate vine motifs. The sapphire is 2.5 carats and is beset by 16 round diamond cuts. 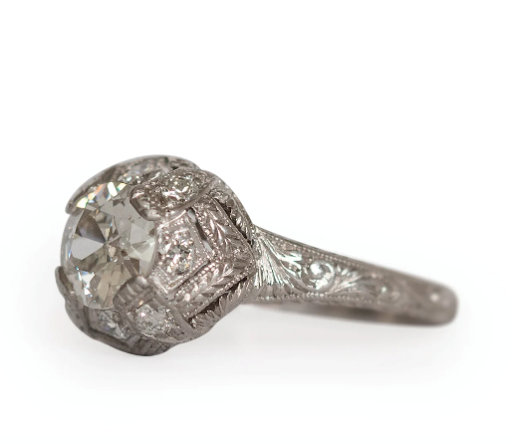 The Art Deco design style influenced everything from architecture to automobiles and jewelry in the 1920s, and engagement rings were no exception. The distinctive style is one of the most iconic antique ring designs of the previous century, and it is still highly sought after today. Sharp lines and geometric shapes made up of several little diamonds rather than a single bigger stone characterize Art Deco rings.

The unique design of this ring has a huge center diamond surrounded by many smaller side diamonds. The platinum band ensures that this ring will last a lifetime. Angular olive brand motifs and paisleys are carved into the leather. 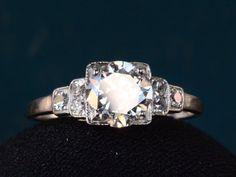 In the 1930s, Art Deco remained the most popular design style, with geometric, multi-stone rings staying popular. Except for the ultra-rich, huge, blingy jewelry took a backseat during the Great Depression for most Americans. During the 1930s, ring styles became more simplistic, with a greater propensity to have one bigger (typically round) stone at the center of rings rather than the plethora of diamonds that were popular in the 1920s. Platinum is still the most popular metal for engagement rings.

Since white gold is a softer metal, this ring is extremely difficult to come across in such good condition. As previously said, the angular setting of this ring adheres to the popular art deco design without having the same flair as 1920s rings. This simple setting is certain to be a style that will outlast fashion. 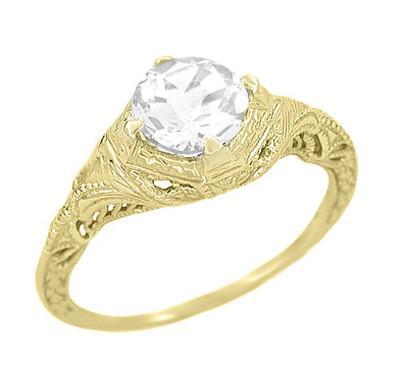 The 1940s witnessed a gradual shift away from the Art Deco era's severe lines and toward floral-inspired rings, with an even greater emphasis on a single stone rather than several little stones in a ring. As platinum became rare during WWII, yellow and rose gold became more extensively utilized in various sorts of jewelry, including engagement ring designs.

With a little campaign by jewelry company De Beers with the phrase "A Diamond Is Forever," this is also the decade when engagement rings will become more exclusively linked with diamonds. Before the 1940s, diamonds were popular in engagement rings, especially among those who could afford them for everyday use.

This 14K yellow gold ring with a solitary diamond is reminiscent of 1940s fashion. 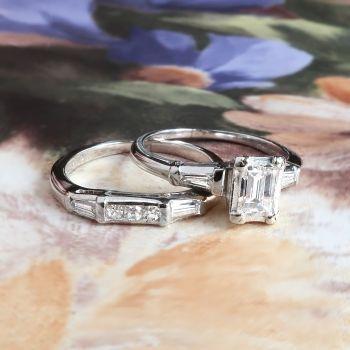 By the 1950s, diamonds were more widely available, and there were less identifiable trends determining the engagement ring market. Certain types, though, were clearly more popular than others. Many rings from the 1950s include engravings or braid features in the setting, which is a style that became less popular after the mid-century. During this decade, rings featured bigger and larger stones. A huge center diamond with symmetrical smaller diamonds, or baguettes, on either side is one of the most famous and lasting forms of this historical period.

The round center diamond is set in an orange blossom setting with two smaller baguette diamonds on either side. The orange flower setting adds complexity to the ring without adding to the finger's height. 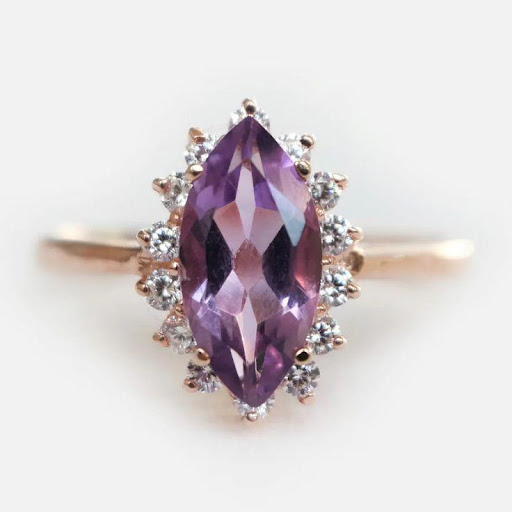 A "classic" engagement ring style became fashionable in the 1960s (see 1950s trends) and continues to be popular today. The most daring and fashion-forward among us, on the other hand, begin wearing engagement rings that no one has ever seen before. Many of those trend setters were Hollywood actresses, whose lives were chronicled in more detail than ever before, and the public was eager to follow in their footsteps. Consider Elizabeth Taylor's enormous jewels and Jackie Kennedy's magnificent emerald and diamond engagement rings. Colored gemstones in engagement rings have become extremely fashionable as a result of the First Lady's transformation into a style icon. 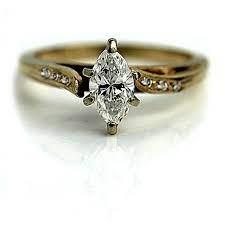 In the 1970s, new diamond cuts such as princess cut and emerald cut diamonds were popular. New setting techniques and the popularity of complementing wedding rings to make a full matching set accompanied these more contemporary diamond shapes.

This ring would probably have been paired with a wedding band. The raised prong setting became popular during this time period as a technique to enhance engagement stones.

It should come as no surprise that yellow gold engagement rings were popular in the 1980s. Engagement ring styles, like fashion trends, follow the decade's fashion trends, and the 1980s were no different. Fancy-cut diamonds are becoming increasingly fashionable, with pear-shaped diamonds garnering a lot of attention. We'd be negligent if we didn't include Princess Diana's huge oval sapphire set in a diamond halo, the decade's (and arguably the century's) most iconic ring. Princess Diana's engagement ring, which was worn by a global icon, inspired ring styles, not only re-popularizing colorful stones, but also prompting high-end and widespread jewelers to manufacture duplicate rings.

While this ring does not include a sapphire, it is clear that it was inspired by Princess Diana's ring. White Topaz is a one-of-a-kind stone for an engagement ring. Hardness in gemstones is rated at an 8 on the Mohs scale, only behind a diamond's 10 grade. Although white topaz has a lower reflective index (1.6) than diamonds (2.4), this does not make it any less desired or expensive. White topaz is an excellent alternative to diamonds for those who desire several stones on their rings without the high cost of diamonds. 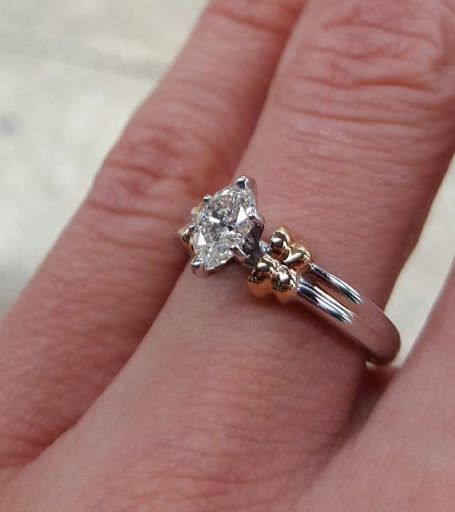 In the 1990s, even larger stones and more fancy-cut diamonds were fashionable, with marquise-cut diamonds being especially popular. Following the opulent '80s, white gold and platinum make a reappearance. In the 1990s, engagement rings became more diversified in terms of form and design—after all, we had a century of popular ring types to draw inspiration from. The internet is also a great source of inspiration. Couples now had more alternatives than simply what their local jewelry shop had to offer, allowing each woman's ring to be really unique.

This ring exemplifies how each engagement ring in the 1990s was one-of-a-kind. The 0.6 carat marquise-cut solitaire diamond is surrounded by a yellow gold knot on the ring. 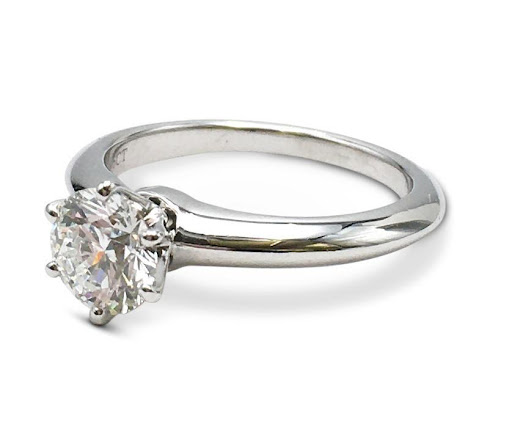 Engagement rings took a turn for the conventional in the new century, with platinum and white gold bands regaining popularity. In addition, traditional solitaire rings and three-stone rings with a huge round or square center stone flanked by two smaller or similar-sized stones became more popular. The three stones are thought to reflect a couple's history, present, and future together, therefore the three-stone design became popular in part because of the meaning behind it.

It's no wonder that Tiffany & Co. diamonds ruled during this time, especially with references to its iconic New York City shop in late 1990s programs and movies. 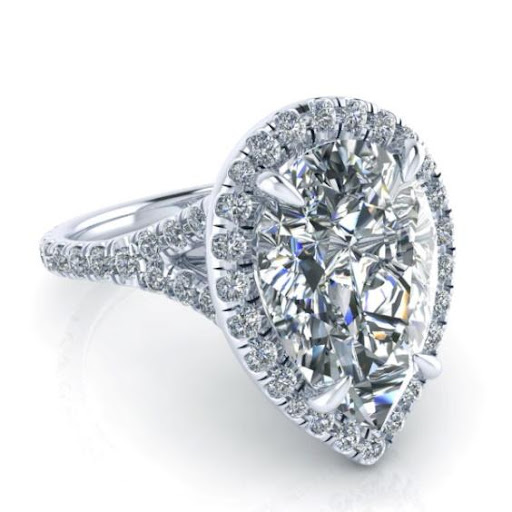 A cushion cut diamond in a halo setting has probably been the most popular engagement ring type in recent years. A halo of little diamonds encircling a bigger solo stone, whether round, oval, or square, creates the illusion of one larger stone. Rings with thinner bands, whether set with diamonds or not, have also become popular, giving the impression of a bigger stone. When Prince William proposed to Kate Middleton in 2010 using his mother's ring, Princess Diana's sapphire and diamond ring inspired engagement ring trends once again. A increasing usage of non-diamond stones (such as light pink Morganite and diamond substitute moissanite) and rose gold settings are two further design trends that will stand the test of time. Beyonce's emerald cut engagement rings, for example, serves as current inspiration for future brides. 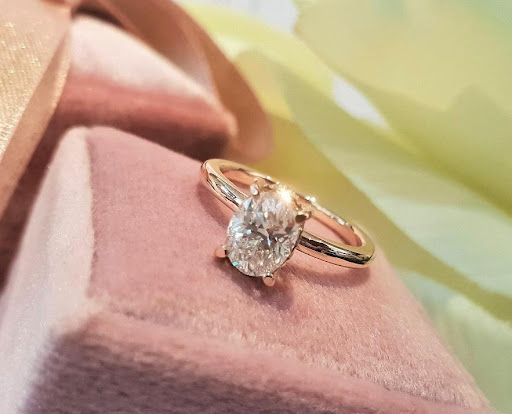 Lab-grown diamonds have becoming increasingly popular for engagement rings as consumers become more conscious of how their purchases affect the environment and other cultures. When you buy a lab-grown diamond, you can be assured that you're getting a conflict-free stone. They're also significantly less expensive.

The brightness and shine of a diamond gemstone may be seen in this 1 carat oval-cut lab diamond. Thin wedding rings with nested wedding bands are very popular.