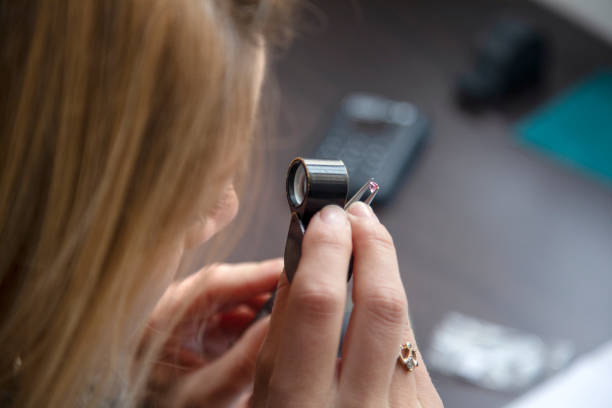 If you've considered purchasing a diamond engagement ring, you're probably familiar with the 4Cs: cut, carat, color, and clarity. The latter, on the other hand, is similar to a diamond's fingerprint and is what distinguishes each gemstone.

What Exactly Is Diamond Clarity?

The quality of inclusions or blemishes found in or on a diamond is referred to as its clarity. The diamond clarity chart assigns a rating to each diamond based on its transparency or purity.

The Value of Diamond Clarity

When you purchase a diamond from a certified dealer, you will receive a report detailing the stone's size, shape, location, and number of inclusions. These are commonly referred to as "flaws." Inclusions in a diamond can range from nearly invisible specs to clouds of minuscule crystals, wispy feather-like fractures, and larger formations that appear grey or even black.

There are several ways to consider your diamond's inclusions. For some, it's a flaw that could diminish the radiance of a gemstone. Diamonds with numerous visible inclusions cannot reflect light as well as a cleaner stone. It's also possible for an inclusion to break through the surface, which she says could have an effect on the diamond's durability. This can make the diamond more prone to chipping or fracture.

Many experts, on the other hand, are fascinated by inclusions. Gemologists adore inclusions because they distinguish each diamond and aid in its identification. Because diamonds are minerals formed hundreds of miles below the earth's surface under extreme heat and pressure, it is unavoidable that they trap other minerals and parts of the earth in their formation. These minerals become identifying birthmarks of the diamond.

The clarity of a diamond affects its price in two ways. The first is that diamonds that are almost entirely free of inclusions are extremely rare, which means they are much more expensive than their more included counterparts. Second, clarity is more important in step-cut diamonds such as emerald and Asscher cuts because their wide facets create a sort of window-mirror effect, making inclusions much more visible. Brilliant-cut diamonds have more facets, which help to conceal inclusions.

The impact of clarity on cost is inextricably linked to the diamond's other three Cs (carat, color, and cut). While the clarity of a diamond can have a significant impact on its price, many inclusions are typically invisible to the naked or unaided eye. In terms of clarity, fewer inclusions in a diamond will typically command a higher price, but the price is determined by all four Cs rather than just one.

Clarity as Graded by Gemologists

On the technical side of clarity, gemologists use cutting-edge technology to determine the grade of a diamond. They find the inclusions with a binocular microscope and then grade the clarity with a 10-magnification loupe. Diamonds are judged using a 10-power magnification lens, which magnifies the diamond to appear ten times larger than its actual size.

Because the types of inclusions that can occur are numerous and each diamond is unique, we encourage you to appreciate your stone's uniqueness. Diamond inclusions are a source of fascination and beauty, ranging from included minerals such as garnet, olivine (peridot), and other diamonds to twinning of the diamond crystal (called twinning wisps) and even star-shaped clouds. So, when you look at the inclusions in your diamond, keep in mind that they are a birthmark of the diamond's origin, which occurred billions of years ago deep in the earth.