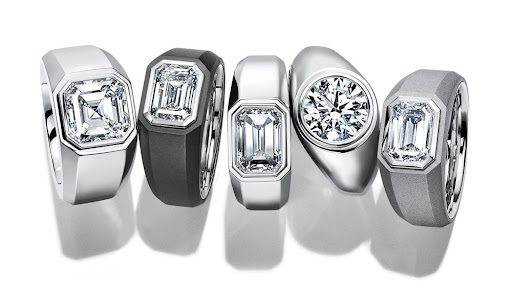 Suppose we told you that the ring on the ring finger of the groom-to-be was equally dazzling.

Men wearing engagement rings has become a hot topic in today's society, and the statistics back this up.

Around 17% of men have said they wouldn't mind wearing an engagement ring in recent polls. Although it might be just as flashy as their bride's, for others it is a more subdued version of what their bride will be wearing on her wedding day. As more and more men around the world want to be more involved in their weddings, this trend is only going to rise.

The department store Macy's (then known as Bamberger's) started designing more expensive rings for men to wear as a symbol of their proposed marriage almost as long as we've been open. However, it's safe to say that this trend didn't take off right away for men in their thirties and forties.

As the years passed, more and more men began to wear their wedding rings as a result of frequent sightings of celebrities doing so. Men's engagement rings didn't resurface until the early twenty-first century. Titanium rings with tiny diamonds embedded in them have become increasingly popular over the years, thanks to a British jeweler.

In contrast to the traditional bridal sets for women, many grooms are choosing to wear their one ring on multiple fingers. During the engagement, it's common for men to wear their rings on their right hands. However, during the wedding ceremony, they switch to their left hands, permanently designating the ring as their wedding ring.

As a new trend in North America, men's engagement rings have been around for centuries in some Latin cultures. The men of Chile and Argentina, as a symbol of their heritage and traditions, often wear engagement rings on their fingers. We expect other countries to follow suit as this trend continues.

We're seeing more and more couples deviating from traditional gender roles and making joint decisions about aspects of their weddings as time passes. In addition, more studies have shown that men's rings are being passed down from generation to generation, just like the bride's rings. Families prize sentimental items, and as a result, some now have twice as many rings to hand down through the generations.

Men's engagement rings are expected to be a long-term trend, according to most observers. From a shift in social norms to an increase in same-sex marriages, this is the progression. Even across the globe, there have been cultural shifts. We at Diamond Registry are happy to help you and your fiance find an engagement ring that fits your style.

This day is all about love.