How Diamonds Are Mined 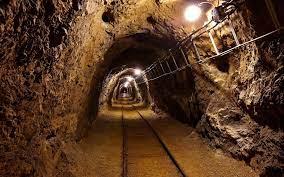 Your diamond's journey began a billion years ago, deep under the earth's crust, at a depth of a hundred miles. The pressure is so high, 45,000 times that at sea level, that carbon atoms condense into diamond, the hardest substance on the planet. Kimberlite, a diamond-containing igneous rock, is brought closer to the earth's surface by a special form of volcanic explosion called a kimberlite eruption, which occurred about 100 million years ago. Kimberlite is a mineral that is often found in kimberlite pipes, which are vertical formations in the earth's crust. Kimberlite is mined for diamonds in three different ways: alluvial mining, pipe mining, and marine mining. It's no surprise that diamonds are scarce because of their arduous trip through the earth's crust. To discover a single carat of diamond, miners must move an average of 250 tons of soil. One London double-decker bus may hold all the gem-quality diamonds ever mined.

takes place in riverbeds and beaches, where natural forces like wind, rain, and water currents wash diamonds from their initial deposits in kimberlite pipes to beaches and riverbeds over thousands of years. To expose the diamond-bearing dry river or ocean bed, miners construct barriers or redirect rivers. Workers first sifted through the sand at the original location, but the process quickly progressed, with the sand being transferred to a screening facility to be handled more effectively. The Kimberlite's rough diamonds are transported downstream in rivers and streams. These diamonds are frequently discovered in the gravel layer of other materials such as mud, clay, and marine life. The industrial alluvial method entails constructing a huge wall to collect water in one location, where the gravel is gathered, brought to the surface, and processed.

involves utilizing special mining ships to harvest diamonds from the ocean floor. Vertical diamond mining employs a huge, ship-mounted drill to bring up the diamond-bearing gravel, whereas horizontal marine diamond mining uses a crawler to suck gravel from the ocean floor to the surface via flexible pipes. Namibia's Namdeb is the world's largest diamond-mining company. Alternatively, they extract diamonds using a huge size drill installed aboard the ship. Namibia's coast is the richest known source of marine diamond resources, accounting for around 64% of the country's total diamond production. While the oldest type of marine diamond mining necessitated a swimmer collecting pebbles from a shallow bottom, current technology has enabled horizontal and vertical marine mining to reach deeper depths.

There are two types of pipe mining: open-pit mining and underground mining.

The most frequent method of recovering diamonds directly from kimberlite pipes is open pit diamond pipe mining. Blasting loosens the diamond-bearing rock, which is then loaded onto massive 300-tonne trucks and transported to a diamond processing factory. Miners extract the layers of sand and rock immediately above the kimberlite rocks in open-pit diamond mining, which takes place closer to the earth's surface. Blasting is used to break up the ore in the pit. After the ore has been crushed, it is loaded and transferred to a primary ore crusher, where the diamond extraction process may begin. Because most open pit diamond mines are located in distant areas, they are extremely costly to run: all workers must be flown in, housed, and fed. The largest open pit diamond mines are the Jwaneng Mine in Botswana and the Jubilee Mine in Russia.

Underground mining, on the other hand, necessitates the construction of two parallel and vertically linked tunnels, with workers blasting ore from kimberlite pipes into the top tunnel, which then falls and accumulates in the bottom tunnel. To get to the kimberlite pipe, miners have to tunnel into the Earth's crust. Tunnels are built on two levels, one on top of the other, with funnels connecting the two. Blasting ore starts on the top level, where it falls via funnels and gathers on the second tunnel. The shattered ore is collected by loaders and brought back to the surface for processing.