Diamonds and Their Science 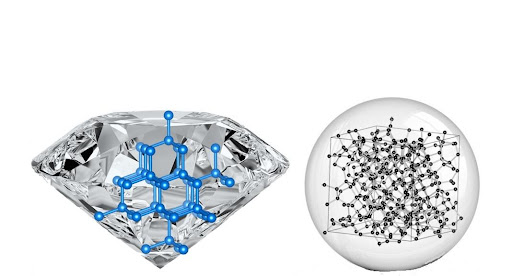 Carbon, one of the most abundant elements in the universe, is almost totally present in diamonds. It is also the second most abundant element in the human body, behind oxygen. Although all living organisms require carbon to exist, they utilize it in different ways. Each carbon atom participates in four powerful covalent bonds that form between carbon atoms, which is why a diamond is such a hard substance. As a result, you end up with this tough substance. Again, where the carbon comes from and how rapidly they develop are all unanswered issues. Still, the circumstances are such that some groups of carbon atoms are close enough to the binding. Other carbon atoms will connect to it as they approach nearer. Any crystal develops in this manner. This repeating network, this structure of carbon atoms, ultimately becomes large enough to create crystals that we can see due to particles locking into place. Each of these crystals, each diamond, each one-carat diamond, represents billions of carbon atoms that have to lock into place to make this significantly ordered crystalline structure.

Diamonds are formed when carbon atoms create an extremely rigid lattice structure. Other components finding their way into the lattice is likewise challenging due to the stiffness. However, elements like nitrogen, boron, and others do occasionally find their way in. The variety of hues seen in diamonds is due to these rogue elements. Many unpolished stones will approximate the typical diamond form we see every day due to the lattice structure. This sign is instantly recognized and may be found on everything from cleaning goods to a deck of playing cards. Diamonds, unlike their near relative graphite, are poor electrical conductors. Blue diamonds, which contain boron, are an exception. Because of their excellent conductive characteristics, they are frequently utilized in industrial applications.

A garnet-filled deep Earth diamond. These inclusions, which arise throughout the diamond creation process, give a window into the circumstances in deep Earth when the diamonds were produced, as well as a means to date them. Of course, the mysterious and unique underground realm where diamonds are created has never been seen, but it has been extensively researched using various indirect measurements. And, thanks to those diamond inclusions, some significant discoveries have been made in this sector in recent weeks. However, inclusions are important to those who research diamonds because they allow them to determine the age and depth of the diamond's creation. Some scientists believe they will eventually give crucial answers to key scientific issues concerning the origins of water on Earth, as well as the origins of life.

Fibrous diamonds and their fluids have yet to be discovered. Fibrous diamonds, according to some experts, are linked to the kimberlite magmas that carry diamonds to the surface. If this is the case, fibrous diamonds might develop just before the kimberlite eruption to the surface, making them considerably younger than many gem-quality diamonds that have been in the mantle for millions to billions of years. However, one research found a relationship between the complete spectrum of fluids in specific fibrous diamonds from northern Canada and subducting oceanic lithosphere, concluding that the initial subducting fluid was >200 million years old recycled seawater (Weiss et al., 2015). This suggests that some fibrous diamonds may have extended mantle residency periods and aren't always associated with kimberlite eruption.

According to astronomers speaking at an American Astronomical Society meeting in 2013, these diamond "hailstones" eventually melt into a liquid sea in the planets' heated cores. These prospective showering diamonds, as well as a slew of other alien diamonds, such as hypothetical diamond planets, will very certainly have their own scientifically exciting and significant story to tell.