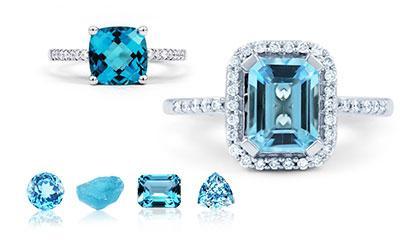 Folklore has it that donning an item of jewelry that contains your birthstone will bring you luck. What could be a more fitting present for your twenty-first birthday than a beautiful blue topaz? The blue topaz is a precious gem that is highly valued for both its appearance and its symbolic meaning. Since the beginning of time, the topaz gemstone has been regarded as a representation of love, tranquility, and happiness. In honor of the stunning blue December stone, this article will take a more in-depth look at the history of the gem as well as the many profound meanings associated with it. Finally, in order to bring this post to a close, we'll offer some sound guidance on how to properly maintain the jewelry that features your blue topaz birthstone.

An Introduction To The Origin And Composition Of Blue topaz

Topaz can be found in many different colors, including blue, and one of those colors is called blue topaz. The majority of historians are of the opinion that the word "topaz" originates from the ancient Greek name "Topazios," which was given to an island in the Red Sea that is now known as "Zabargad." In spite of the fact that it is named after the island of Topazios, topaz has never been mined on that island. Instead of producing topaz, Topazios was famous for its production of peridot, a gemstone that was frequently mistaken for topaz in the past.

During the crystallization process, topaz is produced when fluorine vapors react with igneous rocks. This process takes place underground. Topaz can naturally form in a variety of colors, including blue, but it is extremely uncommon to find topaz that is colored evenly and vividly throughout. Therefore, the majority of the topaz that is sold as jewelry in today's market has been subjected to heat treatment in order to improve or alter its color.

The Meaning Of Blue topaz

Over the course of history, the color blue topaz has been associated with a wide variety of concepts (as well as a variety of qualities). People in ancient Greece held the belief that wearing topaz gave the wearer increased physical power. The ancient Romans connected the gemstone to Ra, the Roman god of the sun and the personification of the sun's role as the source of life. People in Europe during the Renaissance believed that topaz had the ability to dispel anger and break magic spells. They also believed that topaz had the power to break magic spells. People in India believed for hundreds of years that if a topaz was worn above the heart, it would bestow the wearer with beauty, intelligence, and a long life. This belief persisted even after scientific evidence disproved the theory.

Today, blue topaz is most commonly known as the birthstone for December, and it is also the traditional gift of gemstone given to a couple on the occasion of their fourth wedding anniversary. Blue topaz is well-known in modern times as a stone of love, peace, and joy. It is also strongly associated with calming the mind, which contributes to its popularity. Crystal healers of today claim that wearing a blue topaz can boost one's self-confidence, assist one in working through difficult ideas, soothe one's emotions, and make meditation easier.