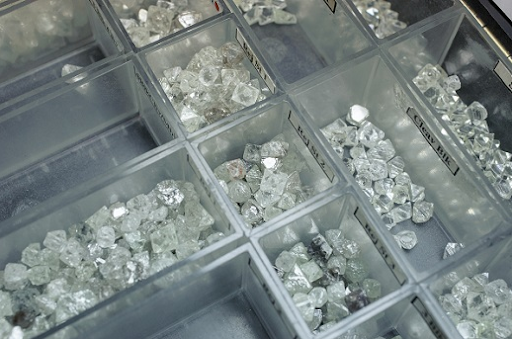 Following a series of sanctions imposed by Western nations on Russia, Alrosa clients have continued to purchase raw from the miner by transferring money in currencies other than the US dollar, the company said.

In spite of the fact that sanctions imposed by the United States and other countries do not prohibit dollar transactions with Alrosa, the Russian corporation has requested that customers pay in euros and other currencies, according to industry sources. The payments were made using alternatives to Swift, a financial communication system from which a number of Russian lenders have been barred from participating.

A rough-market source, speaking on the condition of anonymity, said, “[Alrosa has] always been nervous that US-dollar assets can be frozen and blocked more easily because it’s the dominant trading currency in the world,” Accordingly, “So [requesting payment in other currencies] is just about having non-US-dollar reserves.” on hand.

This means that contract buyers were able to make purchases during the most recent monthly trading session, which took place on February 24, just as the Ukraine conflict began to erupt. Alrosa has informed the business community that operations will continue as usual.

One buyer headquartered in Belgium claimed that Alrosa had requested that his company submit remittances in euros during the sale, even before the financial crisis erupted. In recent years, the Russian miner had experimented with making payments in a variety of other currencies. The customer in question made his payment through an Italian bank.

Despite the fact that the sale was officially held from February 21 to February 25, the vast majority of purchases were made before the incursion began, as global shortages had caused people to be ready to purchase.

“In this market anyway, everybody’s accepting his goods,” the consumer stated. “The moment they became available, you press ‘yes’ [and] make a contract. Technically you could wait for the 25th, but I don’t think anybody would have done that.”

The majority of Alrosa's contract customers are located in either Belgium or India. According to reports, the Reserve Bank of India (RBI) conducted a conference with bankers in which it requested them to come up with measures to make money transfers between India and Russia possible.

While this was going on, India's Gem & Jewellery Export Promotion Council (GJEPC) received a letter from Alrosa on Monday, in which the miner stated that it was prepared to resolve concerns about its activities, according to the trade body.

“The letter also states that Alrosa’s settlements with foreign partners continue as usual as there are no restrictions on the company’s transactions in dollars, euros or other currencies,” the GJEPC continued. “[Having] diverse banking partners allows the company to operate normally without any delays.”

As indicated by an AWDC spokeswoman, the supply of raw diamonds could be jeopardized if the Ukraine crisis drags on for an extended period of time or if sanctions are tightened. Only debt and equity transactions with Alrosa are now prohibited under United States law.

“Being cut off from one of the biggest supplies worldwide will create a market squeeze and prices will go up,” the AWDC said.

As a result of aircraft cancellations and the resulting delay in payment processing, some customers expressed concern regarding the delivery of their orders. Following a suspension of exports to Russia and Belarus earlier this week, commercial flights in the region have been severely constrained as a result. According to a corporate spokeswoman, Alrosa is doing everything it can to minimize the impact of recent events on its clients and has not received any complaints.

“It always takes a couple of weeks [for Alrosa goods to arrive],” a market participant said. “So the question is, will it be more than usual this time around? I imagine Alrosa will go out of its way to try to make this not more than usual.”

During the period of March 28 to April 1, Alrosa will hold its next contract sale.