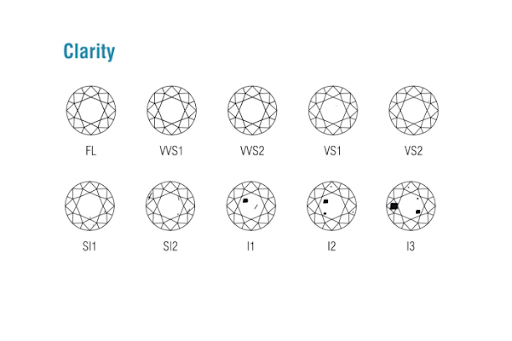 The visual appearance of each diamond is graded using a qualitative criteria called diamond clarity. The higher the clarity grade, the less imperfections and flaws the diamond has. While clarity has a major influence on a diamond's value, flaws are generally undetectable to the naked or unassisted eye. Almost all diamonds have "birthmarks" since they are created deep beneath the earth under high heat and pressure; clarity refers to the degree to which these flaws are present. Because the imperfections interfere with the passage of light through the diamond, diamonds with numerous or substantial inclusions or blemishes have reduced brightness.

The visibility of an item is influenced by its location. Diamond cutters go to great lengths to ensure that inclusions are not visible through the final diamond's table. Because inclusions are harder to notice under the bezel facets or near the girdle, this is the preferred location for them. Almost all diamonds are assessed for clarity using the GIA's 11-point diamond clarity scale, even if they weren't officially graded by the GIA (every Diamond Registry is GIA certified). The GIA analyzes the quantity, size, color, reflectivity, and location of every fault observable under 10x magnification when assessing diamond clarity.

Internally Flawless (IF) diamonds may have exterior features (also known as flaws) that are exceedingly difficult to see at 10x magnification on the stone's surface, if at all, whereas Flawless (FL) diamonds have no inclusions or blemishes when examined under 10x magnification.

Although the name may appear redundant, Very Very Slightly Included (VVS1, VVS2) diamonds are given this designation because, unlike their Flawless or Internally Flawless counterparts, they do contain inclusions that are so small that they are difficult to spot under the 10x magnification used by expert gemologists to determine a stone's clarity.

Very Slightly Included (VS1, VS2)

Slightly Included diamonds (SI1, SI2, SI3) include inclusions that are visible to the naked eye, including as clouds, knots, crystals, caverns, and feathers, even without 10x magnification. Without magnification, the presence of inclusions, no matter how prominent or numerous, is what defines whether a diamond is Slightly Included or Fully Included.

Included diamonds (I1, I2, I3) have highly noticeable inclusions that can generally be detected with the naked eye and even more so under 10x magnification. Excess clouds, feathers, knots, cavities, and crystals big and deep enough to be mistaken for smudges or fissures can cause included diamonds to lose transparency and brightness. Included diamonds, although having these flaws, are nevertheless able to sell well enough, despite being regarded less attractive than a better clarity rated stone.