The Idiamond? Apple With a Bite Makes It to the Gia 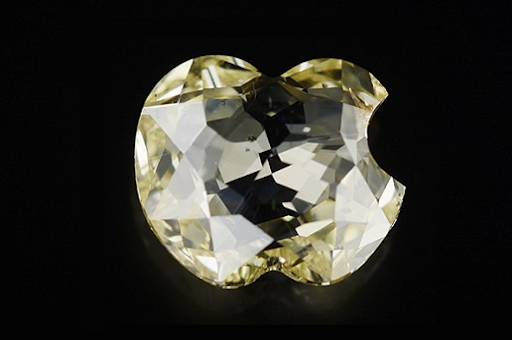 Diamonds have been shaped into stars, horses, and even swords in the past, but a new shape has recently appeared on the market: the Apple logo.

GIA recently received a 1.13-carat fancy-yellow diamond with an unusual cut at its laboratory in Carlsbad, California, according to the organization's latest edition of its journal, Gems & Gemology. The diamond was cut in an unusual manner, the organization said.

One of the GIA's color origin and identification services, which tells the customer what the diamond's color is and whether it is natural or synthetic, had been submitted for the stone. A "striking resemblance" was found between the piece and the famous Apple logo that appears on the back of iPhones and MacBooks, according to the lab's note.

According to senior staff gemologists Maryam Mastery Salimi and Najmeh Anjomani in the journal's Winter 2021 issue, which was published this week, the manufacturer selected the bitten-apple style "as a novelty" and to retain weight. The special cut either completely eliminated inclusions or at the very least assisted in making them as inconspicuous as possible.

This structure exhibited significant windowing, which means that the stone was cut so shallowly that an observer could see right through it. The brilliance and light return efficiency of a diamond are both reduced as a result of this characteristic.

The GIA has seen similar specimens in the past, including a sword-shaped diamond and a "seated Buddha," according to the authors of the paper.

“This unique shape for a faceted diamond is a welcome addition to the wide range of novelty cut diamonds currently available in the trade,” they wrote.