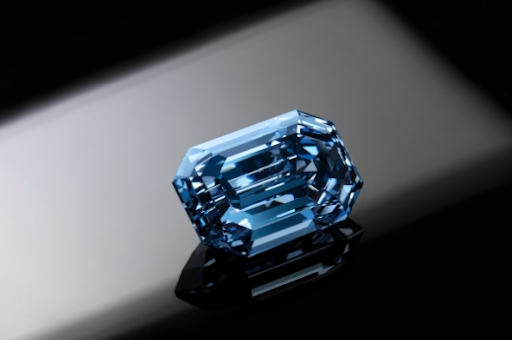 An estimated price of $48 million will be paid for a record-setting blue diamond co-owned by De Beers when it goes under the hammer at Sotheby's in April.

According to Sotheby's, the step-cut, 15.10-carat, fancy-vivid-blue, internally flawless stone is the largest stone of its color to ever appear at auction, with a weight of 15.10 carats. During the auction house's Luxury Week in Hong Kong, the diamond will be auctioned off in a stand-alone sale as part of the event.

According to Patti Wong, chairman of Sotheby's Asia, “Blue diamonds of any kind are rare on the market, but this is the rarest of the rare; nothing of remotely similar caliber has appeared at auction in recent years,” she said. “Brought to dazzling life by the hand of one of the world’s most skillful cutters, it is the ultimate masterpiece — as rare and desirable as the very greatest works of art. At a time of unprecedented demand for the finest, world-class, colored diamonds, we are incredibly excited to bring to the market what is sure to become one of the most celebrated gems in the world.”

It was discovered in April 2021 at Petra Diamonds' Cullinan mine in South Africa, where the rough was worth 39.35 carats. The stone was purchased by De Beers and Diacore in July for $40.2 million, and it was renamed the De Beers Cullinan Blue. Diacore then finished the piece by manufacturing it into the final polished.

Interestingly, this isn't the only blue rough that De Beers and Diacore have acquired. In addition, in November 2020, the two purchased the Letlapa Tala collection from Petra. This collection contains five rough blue diamonds ranging in weight from 9.61 to 25.75 carats each. The diamond, which weighed a total of 85.6 carats, was purchased for $40.4 million.

Until now, only five blue diamonds weighing more than 10 carats have been sold at auction, and none of them has weighed more than 15 carats, according to Sotheby's. Prior to the auction, the blue diamond will be on display in New York, London, Dubai, the United Arab Emirates, Shanghai, Beijing, and Shenzhen, China, as well as Taipei, Taiwan, according to the auction house.

In previous auctions, diamonds of a similar size and cut have fetched high prices. It was sold for $48.5 million at Sotheby's Geneva in 2015, and it was shaped like a cushion and weighed 12.03 carats. It was colored fancy vivid blue and internally flawless. Meanwhile, Christie's Geneva auctioned off the Oppenheimer Blue in 2016, which was a step-cut 14.62-carat fancy-vivid-blue, VVS1-clarity stone with a total weight of 14.62 carats. The stone sold for $57.5 million.