Anyone looking for an engagement rings has undoubtedly heard the term "princess cut," but may not have fully comprehended what it meant. The princess cut is one of the many different shapes that diamonds may be cut into. It is, in fact, one of the most common forms, second only to the round brilliant. 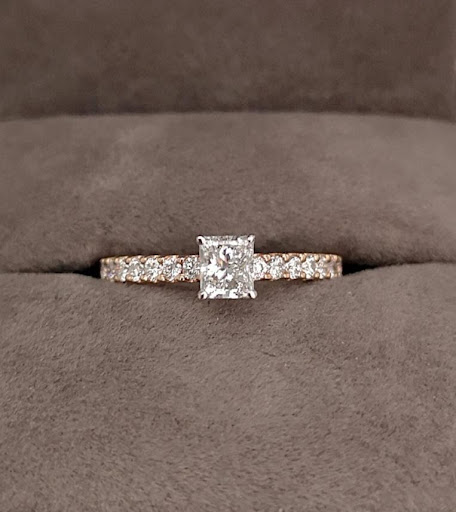 What is a Princess cut diamond?

A Princess Cut diamond is a square diamond with outstanding fire and brightness that is traditionally cut. The inverted pyramid of the raw diamond stone was used to create this exotic form diamond. Princess Cuts are one of the most dazzling diamond shapes, and they're a favorite option for engagement rings. Princess cut diamonds are the kings and queens of the diamond world. Behind round diamonds, princess diamonds, which are one of the square cut diamonds, are the second most common form. Princess cut stones are dazzling cut, much as the stones slightly above them. Princess cuts are square (or rectangular) with pointed corners and up to 76 tiny facets. It's known as a square modified brilliant in a GIA report. While these diamonds, which originated in the United States, have a beautiful shine and daring edges, there's a lot more to appreciate about these square shaped diamonds, such as the fact that its faceting hides faults or inclusions in the diamond. To read more about the history, origin, and popularity of the princess cut.

The history of Princess Cut Diamond

Many people think that the princess cut originated in the 1970s, when Basil Watermeyer developed a new design called the Barion Cut. This specific cut was more of a hybrid between the emerald and marquise cuts. Princess diamonds date back to 1961, when Arpad Nagy, a London-based diamond cutter, produced what was then known as a profile cut. The princess cut is a variation of the same cut. Betzalel Ambar, Ygal Perlman, and Israel Itzkowitz popularized the new term after a few years, and we now know them as "princess cut." The term "princess cut" used to refer to a completely distinct form, known as the "profile cut," created by Arpad Nagy in 1961. This form was considerably different from the original with the same name, but it did have some resemblance to the famous round brilliant.

Arpad Nagy, a London diamond cutter, invented the "profile cut," which he also called the "princess cut," in 1961. In comparison to the 49 facets of the princess diamond we know today, this form has 58 facets. The Barion cut, which was created in 1971, is another diamond form that may be traced back to the contemporary princess diamond. This design was patented by Basil Watermeyer. It had incredibly symmetrical lines that were exceedingly tough to cut. In 1979, the Quadrillion, a comparable form, was patented. In comparison to the Barion's 80 facets, this form has just 48. 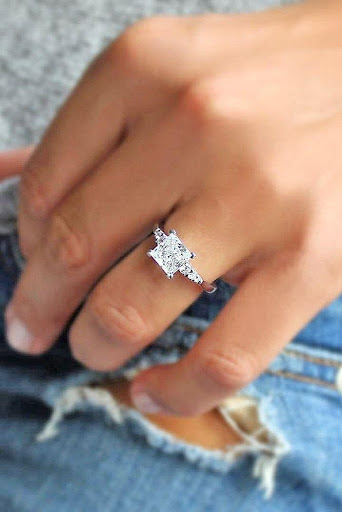 While the princess shape has a history that includes comparable forms that came before it as well as shapes with the same name, the current princess shape was created following a quest for the exact diamond shape that ladies desired. This led to the invention of the 49-faceted diamond, which Yigal Perlman, Betzalel Ambar, and Israel Itzkowitz popularized. Princess-shaped diamonds are a magnificent alternative to round brilliants because of their square-ish form, sharp edges, and pyramid profile. Because less of the rough diamond is wasted while cutting this shape, it is a more cost-effective option than a round diamond, which can only use 50-40% of the original stone.

The princess cut diamond, which accounts for 30% of engagement rings, shows no signs of relinquishing its position as the second most popular diamond choice. Perhaps it's because princess cut diamonds have such a timeless appearance. They resemble pyramids when flipped upside down, and their four pointed corners provide a delicate edge to the delicacy of their brilliance. Whatever it is, princess cut diamond engagement rings aren't the only thing this cut is famous for. The beautiful stones may be found on a variety of jewelry, including necklaces, earrings, bracelets, and ring-hand rings.