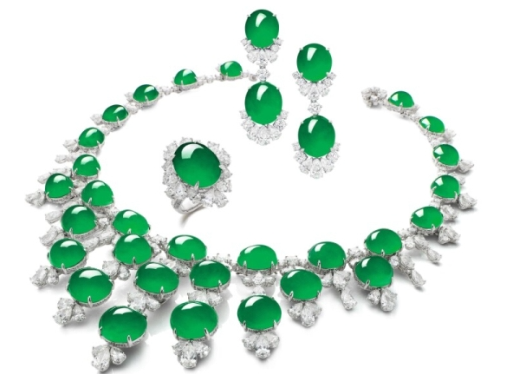 HKD 105.5 million ($13.5 million) was raised by Sotheby's during its Important Jewels sale in Hong Kong, with a four-piece jadeite and diamond collection taking the top prize.

A fringe necklace with oval jadeite cabochons and pear-shaped and brilliant-cut diamonds sold for HKD 18.3 million ($2.3 million) at Sotheby's Hong Kong last week, according to the auction house. The ensemble was completed with a bracelet, a pair of pendant earrings, and a ring.

There were a few other notable items, such as an emerald dragonfly brooch by Van Cleef & Arpels set with sapphire, spinel, and diamonds, which sold for HKD 3.5 million ($452,238), which was just below the high estimate. A cushion-shaped Cartier sapphire and diamond ring with a total weight of 25.18 carats sold for HKD 3.4 million ($436,086), exceeding expectations. An 18-karat gold bracelet set with nine step-cut Colombian emeralds weighing a total of 19.92 carats and surrounded by diamonds in the shape of flowers sold for HKD 3.3 million ($419,948), which was within its presale estimate.