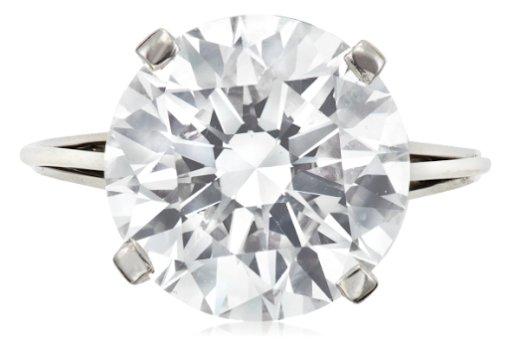 Diamonds dominated the top six lots at a recent Christie's auction, which drew the highest number of bidders for any New York Jewels Online sale in the company's history, with the top six lots all consisting of the precious stone.

According to Christie's, the most valuable item sold was a round brilliant-cut diamond ring weighing 11.46 carats and weighing E-color, SI2-clarity. It brought in $300,000, the auction house said. Interestingly, that figure was in line with the high estimate for the jewel, which was sold without reserve. The sale generated a total of $5.2 million in revenue.

An additional three diamonds were offered with no reserve price to round out the top six diamonds in the auction. Among them was a 5.21-carat round brilliant-cut diamond ring with D-color and SI1 clarity that sold for $150,000, which was in line with expectations. When it came to diamond rings, one emerald-cut diamond ring set with a 5.06-carat, E-color, VVS1-clarity stone sold for $145,000 and another with a 5.05-carat, D-color, VS2-clarity diamond sold for $150,000, missing its lower estimate of $170,000 by $170,000.

Christie's auction house sold 96 percent of the items on the block, with bidders from 28 different countries taking part in the sale.