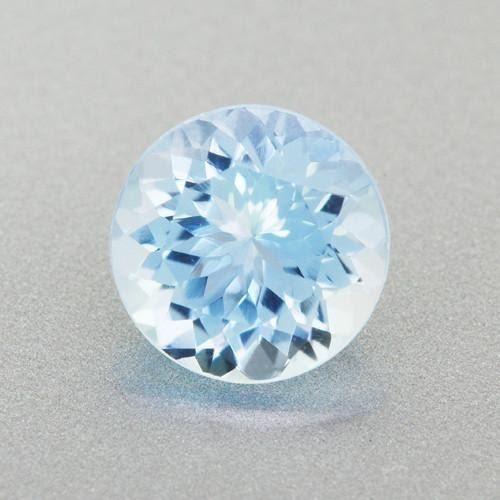 Aquamarine, the birthstone for March, is a beautiful aqua blue gemstone that is often used in contemporary jewelry designs. Sailing sailors were supposed to be protected and calmed by the drink's name, which comes from Latin for "seawater." Aquamarine's history, usage, and spiritual aspects will be discussed here, as well as some jewelry-making ideas. If you've been married for more than a decade, aquamarine is said to bring happiness and rekindle a romance.

Colour:  From a delicate sky blue to an intense turquoise, aquamarine may be found in many different shades of blue. Beryl, of which Aquamarine is a subspecies, is the mineral that gives the stone its blue hue (Emerald is the deep green variety of the mineral).

Appearance:  Increasingly When it comes to aquamarine, it is both transparent and opaque. There are fine hollow rod inclusions that may reflect white light and develop in a hexagonal crystal structure. A cat's eye effect or even a six-rayed star is achievable when there are a great number of growth lines.

Rarity:  Although aquamarine is widely available, particular colors and certain inclusions are more difficult to get. One of the most sought-after colors of Aquamarine is a darker shade of blue seen in Madagascan Aquamarine. Also extremely popular is Cats Eye Aquamarine, which is frequently cut into cabochon stones in order to maximize the visual impact.

Mohs Scale Hardness:  Aquamarine has a Mohs hardness rating of 7.5, making it one of the hardest gemstones.

Sourced:  Brazil is the primary source of aquamarine. Other than that, they may also be found in countries like Mexico and the United States.

History And Formation Of Aquamarine Stones

In the 19th century, the most sought-after hue of this exquisite stone was sea green/blue, however in more recent times the Sky blue and Dark blue have grown more fashionable. The quantity of iron in the gem is what gives it its green/blue hue. Heat treatment has been given to most Aquamarine that is now available to improve its blue color. We suggest that you put your gemstone last so that it doesn't come into contact with any unwanted heat while it is being sent. As a rule, the untreated stones are darker in color than their treated counterparts.

It has been dubbed "The Sailor's Lucky Stone" because it resembles water, which is life-giving. It has also been referred to as 'Water of the Sea' in Latin because of the color of its seat.

Aquamarine is thought to bring happiness and prosperity to women who wear it, according to old folklore.

In tradition, aquamarine is said to have the power of the sea, and many sea goddesses, such as Aphrodite, have been devoted to it. Sailing ships have long relied on amethyst to keep them safe from the elements, including storms and drowning. The diamond is referred regarded as the stone of bravery because of its repute.

If you've been separated from your partner, this gemstone is claimed to help you reconnect, attract international business or contacts, as well as alleviate your fear of water, such as fear of swimming or fear of traveling. According to some, it may create relaxing energies that relieve tension and quiet the mind, instill tolerance for others, and assist the brain in filtering information for clarity.

Sore throats, dental decay, and water retention may all be alleviated by taking it. It is also supposed to assist with digestive diseases, renal issues, and respiratory issues. As a result, panic and discomfort may be alleviated as well. This stone's properties are thought to be heightened when it is submerged in water, yet it may still be quite useful to wear it.

As a stone of travel, aquamarine may help keep you safe on the road, or it might offer up new vistas for you to explore, both physically and psychologically.

Using a blue glass bowl filled with seawater (or a teaspoon of salt) during a full moon, place Aquamarine in the water and let it overnight before rinsing with fresh water in the morning.

The Design Of Jewelry

Aquamarine is gaining prominence as a semi-precious gemstone due to contemporary jewelry trends. With the new Spring 2016 Pantone colors, including 'Serenity Blue,' which Aquamarine reflects well, we believe its popularity will continue to rise.

A robust stone-like aquamarine makes it ideal for jewelry manufacturing, but it is heat-sensitive, therefore care must be given while soldering (as we have said previously - always set last). Aquamarine is one of our favorite gemstones since we are located in Cornwall and work only five minutes from the shore, so we have a strong connection to the water.

The combination of this gemstone with silver and other pastel-colored gemstones is very beautiful.