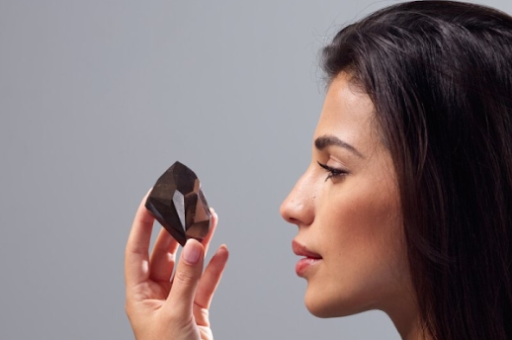 During a one-time auction held last week, the auction house offered the stone without placing a reserve on it. According to Sotheby's, it is the largest faceted diamond of any kind ever to be sold at auction and is believed to have originated in space, according to the auction house.

While Sotheby's did not reveal the identity of the buyer, the auction house did reveal on Twitter that the buyer had paid with cryptocurrency for the purchase. A second tweet from Heart explained that he had purchased the Enigma and that it would be renamed the Hex.com diamond as a nod to his Hex cryptocurrency platform, which he founded. Hex has a "5555 day club," which is comprised of people who have 5,555-day Hex stakes — the longest possible stake in the electronic token — and who are members of the community.

Heart went on to say that the diamond, which has 55 facets as well, is a "match made in heaven" for his platform.

The Enigma is a carbonado diamond, which means that it is made up of many randomly placed diamond grains that interfere with light refraction and increase absorption, giving it a dark appearance due to the increased absorption. More detailed examination reveals that this particular stone contains minute red crystals scattered throughout it, which could be red diamonds.

The rough stone was purchased in the late 1990s and weighed approximately 800 carats when it was first discovered. It took more than three years to cut and polish the diamonds.