A $100 Million Bid for the World's Largest Sapphire 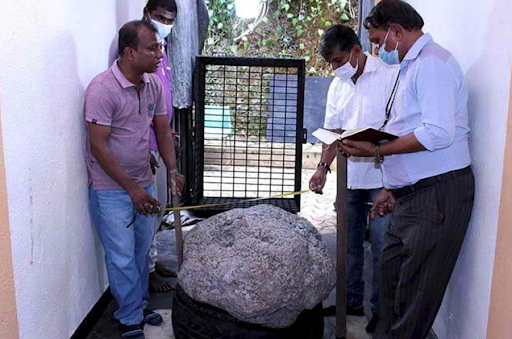 A $100 million offer for the world's largest natural corundum sapphire is being considered by the government of Sri Lanka, according to media reports.

An unidentified bidder from Dubai is interested in purchasing the monster gemstone, which weighs 310 kg (1,550,000 carats) and was discovered by workers digging a well in the back garden of a gem trader last July.

According to media reports, Sri Lanka's state minister for gem and jewellery related industries, Lohan Ratwatte, may refuse to accept a lower offer in order to secure a higher price for the company, which has been valued at up to $200 million. There has also been interest expressed by potential buyers in the United States and China.

According to auction records, the Blue Belle of Asia, a 392.52-carat faceted cushion shape gem set in a necklace, garnered the highest price ever paid for a sapphire at auction in 2014, fetching $17,295,796 at Christie's Geneva.

The Star of Adam sapphire, an oval-shaped blue star sapphire weighing 1,404 carats, is the largest single sapphire ever discovered. In 2015, it was discovered in Ratnapura, the same city where the sapphire cluster was discovered.

Digging A Well In The Backyard Of A Sri Lankan Home

Ratnapura's third-generation gem trader discovered a 2.5 million carat sapphire cluster, which is believed to be the world's largest cluster, behind his house.

A rare stone had been discovered by the well-digger. The owner, who only wanted to be identified by his last name Gamage, told the outlet that they "later stumbled upon this huge specimen."

A year later, Gamage notified the authorities of the discovery, but the stone had to be cleaned for certification for another year.

In spite of the city's well-known reputation as a gem-mining hotspot, the discovery surprised experts.

“I have never seen such a large specimen before. This was probably formed around 400 million years ago,” Dr. Gamini Zoysa, a top gemmologist, told the BBC.

Experts said the stone, which has been dubbed “Serendipity Sapphire,” is worth up to $100 million.

“It is a special star sapphire specimen, probably the biggest in the world,” as it has been dubbed, could be worth up to $100 million, according to experts.

Thilak Weerasinghe, chairman of the National Gem and Jewelry Authority, described it as "a special star sapphire specimen, probably the biggest in the world."

This piece will be appealing to private collectors and museums alike, based on its size and price.