Which Prong Style Should You Choose for Your Engagement Ring? 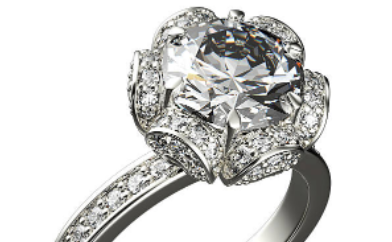 The prongs of a ring, in general, are small metal hooks that grasp the edges of the stone and hold it in place within the setting. It is possible to use different shapes, sizes, and quantities in different situations. Depending on your preference, each individual prong can be button shaped, clawed, split, or "V" shaped, among other things. In order to keep the center diamond firmly in place throughout the setting process, the setter applies pressure to each of these locations.

When the prongs taper off as they approach the stone and come to a fine point, claw prongs are employed (as illustrated on the left in our example). This style's popularity can be attributed in part to the fact that it takes up the least amount of space on the stone's surface, giving the impression that the stones are not present at all. On the other hand, button prongs are the original standard, and they are straight on one side and rounded on the other side on both sides. Claw prongs are most effective on diamonds in the following shapes: round, oval, radiant, and emerald cut, among others.

As an alternative, both of these classic shapes can be created with a split prong (as shown on the right in our engagement ring), in which a single prong splits in half when it reaches the stone, giving the appearance of two prongs on the stone. This method necessitates a little more space, but it has the advantage of creating the illusion of a new form on the stone while also incorporating more exquisite detail. They also serve to provide additional security, and they are frequently used on cushion cut center diamonds, which require stronger prongs than most other types of center diamonds because of the shape of the center diamond.

It is never a good idea to use prongs that are too small for the diamond, as you run the risk of losing a prong or, even worse, the diamond itself. The second most common variation you'll come across has four, six, or eight prongs, depending on your personal preference. When you have double prongs that are bunched together to make it appear as though they are four, you will typically see eight prongs in the overall arrangement. Concerns about security are the most frequently expressed when deciding between the numbers four and six, and the level of concern varies depending on the type of metal used. Four prongs can be just as effective as six prongs in certain situations. One of the most popular options is four, which is a fantastic alternative that allows you to see more of the diamond. As long as they are strong enough, less is more when it comes to diamonds. However, if you want to set a marquise or pear-shaped diamond, you will need at least five or six prongs to hold these elongated stones securely in place.

Among other things, "V-prongs" are used to protect the points of diamonds with sharp corners, such as princess cuts, pear shapes, and marquise cuts. While they are not as delicate or visually appealing as the prong designs previously discussed, they are necessary in order to ensure that the diamonds' sensitive points are properly protected and that the diamonds' sensitive points remain intact.

We at Diamond Registry are experts at guiding you through every step of the process so that you can end up with the most beautiful ring that you can possibly envision.