What Exactly Is a Promise Ring and What Does It Mean? 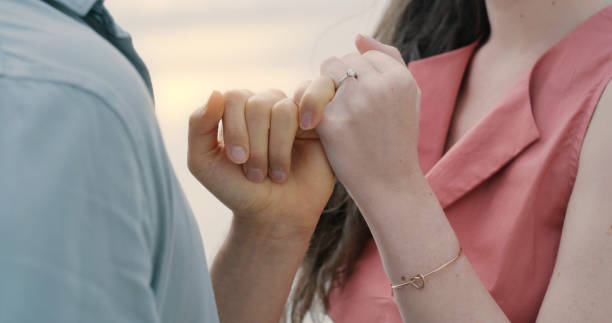 While many people associate promise rings with teenagers, puppy love, and even abstinence (more on that later), the gesture and meaning behind a promise ring is much deeper and appropriate for couples of all ages.

What Is a Promise Ring?

A promise ring is given and worn to express commitment and fidelity to another person.

The Significance of a Promise Ring

In the most basic sense, a promise ring is a step up from dating. It demonstrates to the world that your heart belongs to someone else and that you are committed to protecting and nurturing that relationship. A promise ring is most commonly given as a precursor to an engagement these days, but this is not always the case.

Because some of my clients do not believe in marriage, they give promise rings as a symbol of a long-term relationship. But, if you intend to marry one day, why not just give the engagement ring and ride it out?

Finances, age, and location can all be factors. A couple in medical school, for example, may have years before they feel financially secure enough to pay off a diamond and major loans, and a couple with one member on a professional stint overseas may want to postpone an engagement until they're physically together. Teenagers in love may lack the maturity to handle the more adult aspects of cohabitation and marriage. A promise ring acts as a placeholder for a future engagement without initiating the wedding planning process in these cases.

Though it is reasonable to consider a purity ring to be a type of promise ring, the two are not completely interchangeable. A purity ring is worn as an outward pledge to refrain from sexual activity until marriage. A promise ring can have the same meaning if it is made within the context of a relationship, but it is generally considered something separate if it is made to oneself, one's parents, or one's religious institution.

Promise rings have been around since the Roman era. Romans had to wait a certain amount of time before marrying, and rings were given as a sign of commitment during that time.

In the 14th century, the more romantic posy ring appeared, which was worn as a symbol of affection between lovers. Posy rings, also spelled poesy, were bands engraved with a short poetic phrase (often written in Latin or French) to represent romantic feelings. Acrostic rings cleverly spelled out words like "regard" and "dearest" in gemstones in the nineteenth century. ("Regard" was communicated with ruby, emerald, garnet, amethyst, ruby, sapphire, and tourmaline, while "dearest" was communicated with diamond, emerald, amethyst, ruby, sapphire, and tourmaline.)

A promise ring as a pre-engagement ring is a more recent idea. People have given promise rings as a sort of midway guarantee as courtships have grown longer. With a promise ring these days, you're saying, "We'll get married eventually, but we're not ready yet." It reassures both parties that the relationship will continue.

What Is the Form of a Promise Ring?

The short answer is: there isn't one! Promise rings, like engagement rings, come in a variety of styles. The ring should be tailored to the wearer's personal preferences, but not so garish that it can't be worn every day. Here are some popular promise ring trends:

How much should a promise ring cost?

What is the proper way to present a promise ring?

Marriage proposals can be extravagant. Grand gestures, romantic monologues, and getting down on one knee are all part of it. Giving a promise ring should be the polar opposite of that. You don't want to trick your partner into thinking he or she is about to be proposed to.

On which finger is a promise ring worn?

A promise ring can be worn on either hand's ring finger. It is typically worn on the left hand if it is given and accepted as a symbol of future commitment.

How long do you wait after giving a promise ring before giving an engagement ring?

A promise ring does not start a countdown to marriage, but it is something you should be prepared to talk about. Be open and honest about how you see your future as a couple and your feelings about marriage in general.

What happens to a promise ring after you get engaged?

Whatever you desire! Some will move it to their right ring finger, while others will wear it on a necklace, and still others will hide it. Promise rings are being incorporated into the rising trend of stackable jewels, and can be worn in place of your engagement ring while traveling. We've seen promise/engagement ring stacks, in which a stack of rings begins with a promise ring on their engagement finger, then a wedding band, then a diamond band. The left ring finger represents various stages of life and their relationships.