Wedding Ring as an Engagement Ring 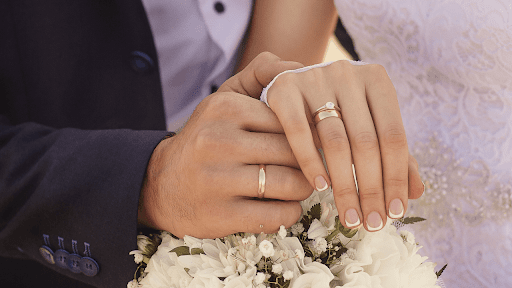 Since Roman times, people have been getting married and exchanging jewelry as a symbol of their union. When wedding bands were first worn, they were not only a symbol of marriage, but also a reminder of the wearer's commitment to their spouse and an indicator of social status.

Even though the engagement ring wasn't invented until hundreds of years after the rest of the wedding festivities, there are still many deeply ingrained customs surrounding the exchange of rings at weddings and other significant life events.

The Duchess of Cambridge Kate Middleton's simple gold wedding band, rather than her internationally famous blue sapphire engagement ring, makes headlines around the world when she appears in public.

When it comes to how we display our marital status, even in a time when we've redefined marriage, it still feels like it's open to public opinion.

If you want to wear a wedding band instead of an over-the-top engagement ring, the choice is yours, and the options are endless when it comes to your wedding jewelry.

Wedding bands instead of engagement rings have become increasingly popular.

In keeping with a more understated aesthetic, it makes sense to present a wedding band as part of the proposal. We’ve begun tossing out anything that doesn't spark joy in our lives, and while it's hard to imagine, a large stone may not do that for some women.

One of the most versatile rings for today's women is a glittering wedding band that can be worn with any outfit and in many different settings.

The Bride On A Budget

Traditionally, an engagement ring will feature a large stone, such as a diamond, as well as smaller stones, or a "halo" of gems, surrounding the larger stone.

Is it possible to hear the money piling up? Yes, the price of an engagement ring will vary depending on a number of factors, including the stone, cut, color, clarity, and carat weight.

Choosing a wedding band over an engagement ring is also considered a practical choice because it's easier to wear. When a woman works with her hands all day or is on the road a lot and doesn't want to show off her bling, a low-profile ring is the perfect choice.

Whatever the reason, Honey believes that a piece of jewelry can be both stylish and functional.

Wedding bands are becoming increasingly popular as engagement rings, thanks in part to the increasing visibility of celebrity-owned eternity bands on social media.

According to reports, then-boyfriend Tristian Thompson proposed to Khloe Kardashian when she suddenly began wearing a stunning baguette wedding eternity band on her left ring finger in 2018.

That being said, we're retracting our statement that this was an affordable option because there were multiple eternity bands in the Kardashian style. All over the world, people were making their own interpretations of her new ring after it was unveiled.

Honey has released new french cut eternity rings in 1.3, 1.8, and 2.4mm widths in response to the growing trend of couples choosing to wear a wedding band instead of an engagement ring.

Brides-To-Be Who Can't Make Up Their Minds

When it comes to choosing an engagement ring, some women have spent the better part of their childhood planning every detail of their wedding, while others can't make up their minds.

Choosing a wedding band for your proposal will come down to a simple piece of advice: talk to your significant other.

Drop hints or ask directly if your future wife's ring has a vision. We don't know if she has any or too many visions! No matter how hard you try, there will never be enough options for the bride who just can't make up her mind about the traditional engagement ring.