The Meaning of Wearing a Cross Necklace 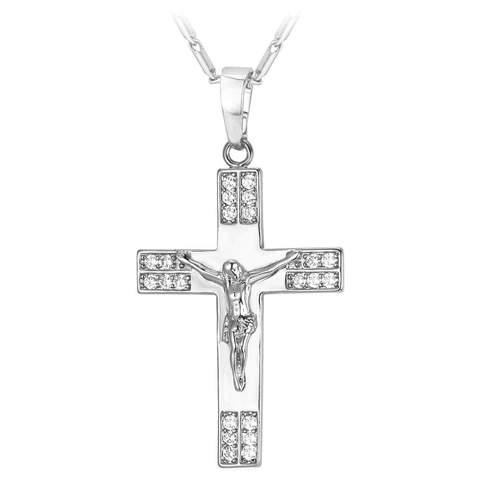 The cross necklace has been worn proudly by Christians of all religions for ages to represent one's faith. Some people wear a cross necklace every day as a mark of devotion and never take them off. Others may sport a gold cross necklace as a stylish religious statement. Cross and crucifix necklaces are popular among both men and women, and they are an essential element of Christian culture.

The cross is a strong symbol of love and sacrifice in Christianity, and the meaning of the cross necklace exemplifies this. It depicts how Jesus, the Son of God who came to earth as a person, died for the salvation of all mankind. He was crucified on a cross, buried, and three days later resurrected from the dead. The figure of the simple cross is always empty, unlike a crucifix, which represents Jesus' body on the crucifixion. Wearing a cross necklace has a symbolic connotation that emphasizes Jesus' hopeful resurrection after his death rather than the pain he experienced during his sacrifice.

Religious symbols on jewelry may be traced all the way back to the Ancient Egyptians, who wore them to honor and revere a god or belief system. When Rome became a Christian state and Christianity was no longer persecuted, the cross became a prominent Christian emblem. Early Christians began to wear symbolic jewelry as a statement that connected them with their religion once it became safe to do so. The cross, once a gruesome execution weapon, has become a popular symbol of love and hope, adorning pewter and silver cross necklaces as wearable pendants.

What Does It Mean To Wear A Cross Necklace?

Christians aren't the only ones who have a personal attachment to the cross. For various reasons, many non-Christians find themselves drawn to the emblem. Almost everyone may discover a cross necklace that appeals to them because of the variety of styles and looks available. The history of the cross might encourage you to be more courageous and dedicated in your daily life. Even if you don't believe in Jesus, the narrative of his dying for the sake of others may inspire you greatly. After all, you don't have to be religious to appreciate the value of sacrifice, particularly when it comes to the lives of others.

Cross Pendant As A Gift

Many diamond cross necklaces are presented as gifts to young people during major life events like as baptism, first communion, or confirmation. Even when the donor and receiver are not religious, they are frequently given at significant secular milestones in a person's life, such as graduation or achieving adulthood. You don't have to be a Christian to appreciate the beauty of a diamond cross pendant. The basic form is appealing in and of itself.