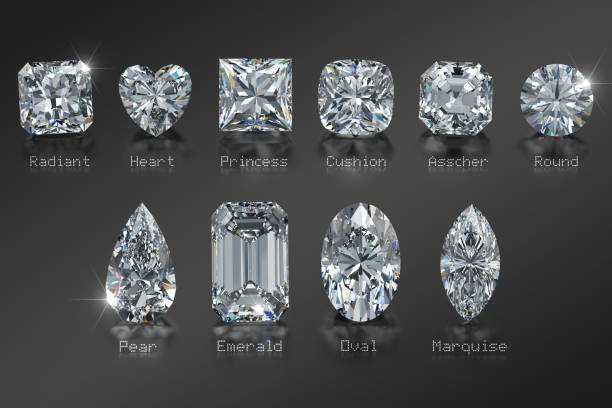 The first-round diamonds of their kind, transitional cut diamonds had an unmatched brilliance and exact symmetry that were virtually unheard of at the time. They fill the void between the traditional cuts and the contemporary round brilliant, and were popular from the 1920s until the 1940s.

The development of the modern diamond cutting machine in Boston, United States, during the late 19th century is credited with giving rise to transitional cut diamonds. Henry D. Morse is regarded as the founder of the American diamond cutting industry.

The contemporary diamond cutting machine was created by Charles M. Field, the foreman of the Henry D. Morse firm, who received a patent for it in Boston on April 4, 1876. The first persons to create early American cuts of diamonds were Morse and Field, who were not hesitant to cleave off rough to enhance the brilliance and beauty of the stones. They were early American diamond cutters who aimed to standardize stone proportions for the optimum light performance. Because of this, transitional cut diamonds have a variety of dimensions, angles, and factual values.

The present round brilliant and ideal cuts were created after Marcel Tolkowsky, a renowned diamond cutter, mathematically improved the proportions thirty years later.

The transitional cut, often referred to as the early American cut or early modern cut, marked a significant turning point in the development of the modern cutting method. Old European cuts formed the basis for it, but unlike OEC, transitional diamonds were machine-cut with the highest level of perfection to showcase the beauty of the stones.

Characteristics of the Transitional Cut

The transitional cut, like any other cut, has a few distinguishing visual traits that set it apart from traditional and contemporary diamond cuts.

The old European cut's immediate descendent, the progressive transitional cut, has a broader table. Its table is smaller than that of contemporary round brilliants, though.

Transitional cut diamonds have a shallower pavilion and a lower crown than OEC diamonds. In contrast to modern round brilliants, they also feature a taller crown and a deeper pavilion. Old European diamonds were cut to maximize weight retention rather than aesthetics, which is why. To attain the best light performance as in brilliant diamonds, the transitional cut parameters were still not that perfect.

The transitional cut features thinner pavilion facets and shorter lower girdle facets than the old European cut because it has a lower crown and shallower pavilion than the latter. Compared to transition cut diamonds, OEC diamonds have larger, chunkier facets. The facets of the round brilliant cut are still narrower than those of the transitional cut, though.

The big open culet that is visible from the table is a hallmark of old European cuts. Transitional cut diamonds, in contrast, have a smaller culet that is less obvious to the spectator. However, the culet of the early American cut is still very distinct when compared to the modern rounds.