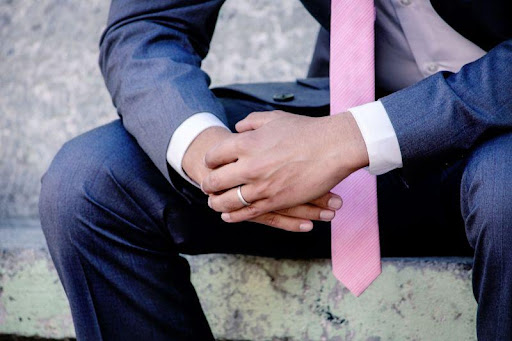 Did you know that 5% of men wear engagement rings? Traditionally, engagement rings were only worn by women, but this is changing as more men choose to wear them on their left hand.

Men's Engagement rings In The Usa

Men's engagement rings aren't a new concept. In fact, L. Bamberger & Co. (now Macy's) began advertising them in newspapers in 1926, nearly a century ago. The rings were named the Stag, Pilot, and Master. The campaign fizzled.

Maybe it was because men didn't wear much jewelry back then. Humphrey Bogart, the first movie star to wear a wedding band, and his Old Hollywood-style jewels influenced many to wear wedding bands in the 1940s.

According to a Pew Research Center study from 2010, 62% of Americans preferred a household where couples shared domestic responsibilities. In 1997, only 48% of the public supported these ideals.

Seeing these trends, the jewelry industry decided to rethink the men's engagement ring.

The Tioro Ring, designed by British jeweler H. Samuel in 2009, started the “mangagement ring” trend. The Tioro was fancier than the average men's wedding band but less expensive than a titanium engagement ring with one or two tiny diamonds. The priciest design was around $204.

Why Do Men Wear Rings?

They do so for several reasons. Consider personal and cultural factors when deciding if a men's engagement ring is right for you.

A diamond engagement ring traditionally signifies someone (usually a woman) is “taken”. But, as younger generations begin to value equality within a relationship, why wouldn't both partners wear rings to show their commitment?

And many millennial men agree. “After I proposed to my fiancé, she did a second “proposal” of sorts while we were on vacation,” Jamie Raines said in an interview with the Huffington Post. She wanted me to have a ring too, and I see it as a sign of equality with my fiance Shaaba. The ring hasn't "claimed" her. We both wear one to show our love.”

Engaged men are as excited as their fiancé about this exciting step in their relationship. Why should the ladies get all the fun?

Men wear engagement rings to pay homage to their heritage. It is customary for both genders to wear an engagement ring after a proposal in Chile, Brazil, Argentina and Sweden.

Engagement rings are worn on the right hand and moved to the left after marriage in Chile. This represents the marriage transition. In Argentina, an engagement ring is silver and a wedding ring is gold. In Sweden, both parties exchange rings, but only the bride adds a second during the ceremony.

Same-Sex Marriage: Gay marriage is increasing sales and popularity of men's engagement rings. While a return proposal isn't required, many gay men choose to do so.

Because same-sex marriage is new in America, there are few established norms. This can be exciting because gay couples can create their own traditions and customs.

Traditions are being broken as more women propose.

“The playing field has been leveled,” said marriage therapist Jane Greer to the Huffington Post. “Women have more control and choice in their lives. Nobody has to wait for the man to propose and wonder if or when it will happen. Modern women can express their needs and desires more clearly in relationships.”

Every 20th woman proposes to her male partner. However, many women who give a ring still want to receive one of their own.

Fashion and Celebrity Influence: As stated previously, pop culture has a huge impact on jewelry trends. With celebrities like Ed Sheeran, Skylar Astin, and Michael Buble wearing “mangagement” rings recently, it will be interesting to see if men's engagement rings gain popularity.