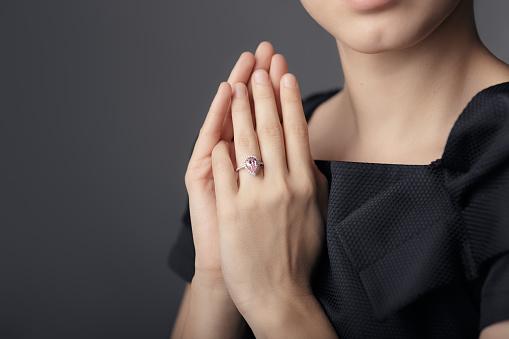 Diamonds have been a symbol of wealth, power and love for thousands of years. They are considered one of the most beautiful gemstones in the world and are known as the hardest material found naturally on earth. Diamonds are so valuable because they are rarer than other precious stones such as rubies or emeralds. There are many misconceptions about diamonds which we hope this article has cleared up for you!

When it comes to diamonds, there is a lot of information that people tend to know. But did you know that the word "diamond" comes from the Greek word adamas, which means "invincible"? Or that diamonds are made of highly compressed carbon atoms that formed deep within the earth's crust? If you didn't know these facts about diamond engagement rings, don't worry! They are just a few of the little-known facts about these precious stones:

Diamonds come in many different shapes and sizes.

You may have heard that diamonds come in many shapes and sizes. So, if you want a round diamond, you’re in luck! But what if you want something like an oval or pear-shaped diamond? You can have that too! Diamonds can be cut in a variety of ways to create different shapes.

The most popular shape by far is Round Brilliant Cut, which has 58 facets (the sharp edges on its sides) and 58 vertices (the points where lines intersect). Other popular shapes include Princess Cuts (45), Asscher Cuts (51) and Marquise cuts (47).

The word "diamond" comes from the Greek word adamas, which means "invincible."

The word “diamond” comes from the Greek word adamas, which means “invincible.” It is a stone that has been used as currency, jewelry and even a symbol of purity in many cultures throughout the world for thousands of years. By definition, diamonds are not just for women; men can also wear them if they so choose (think rings). In fact, it was once common practice for engagement rings to feature both a diamond and another gemstone such as sapphire or ruby. The term "diamond" was first used in 1477 when Italian jeweler Filippo Calcabrina wrote about how he had been commissioned by King Ferdinand II of Naples to design a ring that incorporated an emerald flanked by two diamonds on either side of it.

Diamonds are made up of highly compressed carbon atoms that formed deep within Earth's crust over billions of years ago during volcanic eruptions—even before humans were around!

It takes carbon 1 billion years to become a diamond.

Carbon, the most abundant element in the universe, is also found in every cell of your body. In fact, carbon is second only to oxygen in its prevalence on earth. It takes carbon 1 billion years to become a diamond. That’s because diamonds are created under intense pressure and heat within 100 miles of Earth's surface. Diamonds have been used as engagement rings for thousands of years because they last forever—or at least as long as your love does!

Diamonds are not just for women.

If you’re planning on giving your significant other a diamond ring, it’s important to know that diamonds are not just for women. Diamonds are a symbol of love and commitment, and they are still the most popular gift given by men to their partners. While they might not be as flashy as other gemstones like sapphires and rubies, diamonds have long been used to show wealth and success: they come in many colors but can only be mined in one location on Earth—South Africa. The rarity of this precious stone makes it an ideal choice for any man who wants something elegant yet understated.

Did you know that women's finger size varies between seasons? It's true! Depending on the temperature, your fingers will swell due to changes in blood flow and moisture. This means that the average woman's ring size will change by about 1/2 a size (or more) throughout the year, with fingers swelling up to 6 millimeters when it's hot outside and shrinking again when it gets cold. In fact, if you are looking for an engagement ring right now it's best to get her finger measured while she is at her coldest point—that way she can enjoy wearing your beautiful diamond as much as possible before things start warming up again!

Diamonds are made of highly compressed carbon atoms that formed deep within the earth's crust.

The carbon atoms in diamonds are arranged in a very specific way and this makes them so hard and durable. They can be scratched by other diamonds because they too are made of carbon but they cannot be scratched by anything else because of their unique atomic structure!

Diamonds can be created from a wide array of materials.

The diamond engagement ring is one of the most popular and traditional ways to show your love for someone. However, many people don't know that diamonds can be created from anything other than carbon. In fact, diamonds are the hardest material on earth and have been used for centuries in industry and jewelry making.

Diamonds are also the most expensive gemstone (valued at $42 billion annually) and considered by some as "the traditional gift" for engagements because they're believed to bring luck upon marriage.

There is no such thing as colorless diamonds.

There is no such thing as a colorless diamond. The diamonds we see in jewelry stores are not truly clear, but graded on a scale of color. The Gemological Institute of America (GIA) has developed a grading system that ranges from D (colorless) to Z (light yellow). The higher the grade, the less visible traces of color there will be in your diamond. A quality GIA certified diamond should have an undetectable presence of yellow tint or brown tint, giving it its characteristic sparkle and brilliance.

In ancient Rome, diamonds were used as an antidote for snake bites.

It is well known that diamonds are one of the most popular gemstones. However, many people know little about their history and the ancient beliefs surrounding them. In fact, diamonds were believed to be tears of gods and used as an antidote for snake bites in ancient Rome.

In ancient Rome, diamonds were believed to cure snake bites because they were thought to kill poison in a bite. Roman soldiers used these precious stones on their swords to protect themselves against venomous snakes while traveling through desert lands or fighting battles in enemy territory. The Romans also believed that diamonds were the tears of gods—which led them to use them as an antidote for headaches caused by poisonous vapors from volcanic eruptions or hot springs (i.e., natural geysers).